So there is this image that I have seen on Twitter which really bugs me since over a week now. I read this exchange of tweets between my academic and life hero, Sonia Livingstone, and one of her readers. For those who are not aware of Livingstone’s life work, basically, she is one of the thought leaders of actual academic research into the impact of tech on young people and their families. She wrote books, studies, numerous articles and blog posts about the topics doing her best to demystify the current, very simplified discourse of mainstream media around tech and kids. The discourse which in many instances aims to scare parents, ban children off tech and preferably shut us down in a dark room with books and a fountain pen until we are about 18, at least. I am exaggerating, but seriously. Isn’t it about the time we look at our sentiment of conversations around the use of digital technologies of children and young people and simply calm down? Isn’t it time to finally move the tech into the category of tools and focus on the important parameters: education, parenthood, play, actual landscape young people grow up in? Not just tech, all of it together. In all its complexity.

So there is this image that I have seen on Twitter. It has really haunted me. I know something was deeply wrong with it since the minute I saw it in the rather trolling tweet-response to Livingstone’s original tweet. Look at it and think about it for a second. Do reflect on the feelings this image provokes in you. Does it bother you? Does it upset you? Does it feel balanced and every-day? 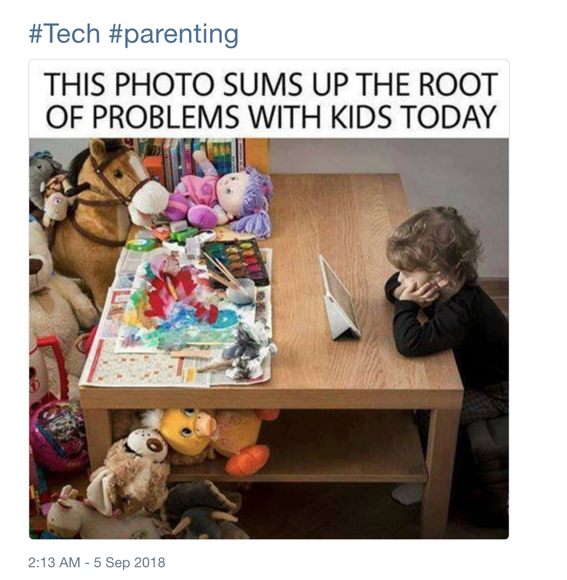 What is wrong with it and what really enters your mind the moment you look at it? I had mixed feelings. Anger to see such simplified point. Someone took a lot of time to set up this scene and we all know it’s not the reality of modern parenting. I really do not know a small child that could sit so far away from fluffy toys are would not love to mess around with paints. (I do not think so young they would go for crosswords on paper, they would indeed try it on an iPad, I agree with that). There was also guilt – because like many parents today, I do wish I had more time with my son and I do wonder if sometimes his gaming is a result of my lack of time for him. I know it really isn’t, but I still feel guilty when I look at this image. There was a lot of anger about the stupidity and ignorance of the comments included in the tweet but I have this rule: when I drink or when I am angry, I don’t tweet. I did make a note of the tweets and decided to think it over a bit.

So here is what really bothers me about this picture and the answer came the following day. I went to work (Off The Record, Bristol-based mental health charity for young people) and happened to chat with a colleague about my upcoming counselling studies. Somehow our conversation navigated towards the changes this career path tends to evoke in people, sensitivities and new radars for feelings. He actually mentioned that since his new counselling courses started, he is way more cuddly with his mum. He really appreciates the physical touch, the love shared through a simple hug. And that comment made me realise that what really bothers me about this picture is the lack of the parent. Here we are, preaching about the roots of problems with kids when yet again, we are not really talking about the role of parents in the process. Some studies conducted by Livingstone show that parents in the UK increasingly do worry about tech and kids, but also try to look for solutions. I think the sentiment of those discussions is changing. But I really do not think we need oversimplified images of children abandoned with an iPad and toys, regardless of their location. What we really need to see, are images and stories of people who sat down with their kids, made time and discovered how those new technologies can benefit their parenthoods, childhoods, family lives together. And working out boundaries, risks, pitfalls too, of course.

This picture bothers me, because it is seemingly balanced, where in reality it shows a way the deeper problem with have with our perception of technology for children and young people. We, many of us, think that it is there to be added to the toy basket and kids will work it out themselves. Yes, I am sure many of them will. But just like with crafts and arts, fluffy toys and books, so with technology: they will never ever learn to enjoy the togetherness of human connection if we do not teach them, show them, lead them by example. Us, parents. It’s on us. Not on kids. It’s time we get this and start including those young humans in our joint technological discoveries. It could possibly prove to be quite a powerful way of sharing, playing, learning and connecting even more. I know it can.

Photo by Alexander Dummer on Unsplash

My Top Blogging Tips 3: Plan your content and tonality